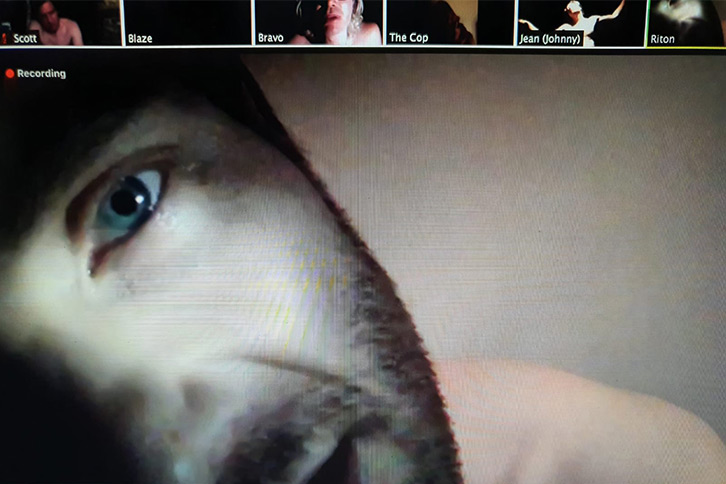 During the 2018 TNB Festival, Arthur Nauzyciel decided to present the Rennes audience with his piece Splendid’s (2015), a sensual and spectral work founded on an aesthetic research between theatre and cinema.

—
The story centres on seven gangsters who, having kidnapped the daughter of an American billionaire, have barricaded themselves in the Splendid’s Hotel. Since the creation of Julius Caesar in the United States in 2008, Arthur Nauzyciel has been working with the same team of American actors, joined for Splendid’s by Xavier Gallais and Jeanne Moreau. In March 2020, however, the borders were closed.

For a long time the government quarantine made it impossible for artists and their work to tour. Hard hit by the consequences of the shutdown in the United States, and with few prospects to work, the original cast of Splendid’s made the connection between their predicament and the play’s scenario: confinement, an exterior threat, solitude. In order to escape their oppressive reality, the actors – like the gangsters who need to invent another life for themselves to bear all the isolation and waiting – decided to retell Genet’s text using a video conferencing platform. Over the next two months they worked with Arthur Nauzyciel to adapt the performance to this new digital approach.

From their own homes, eight actors spread between the United States and France overcome distance and separation once again, reuniting to perform this sensitive work that bears an intimate resonance for each of them. The experience is at once virtual and deeply human.