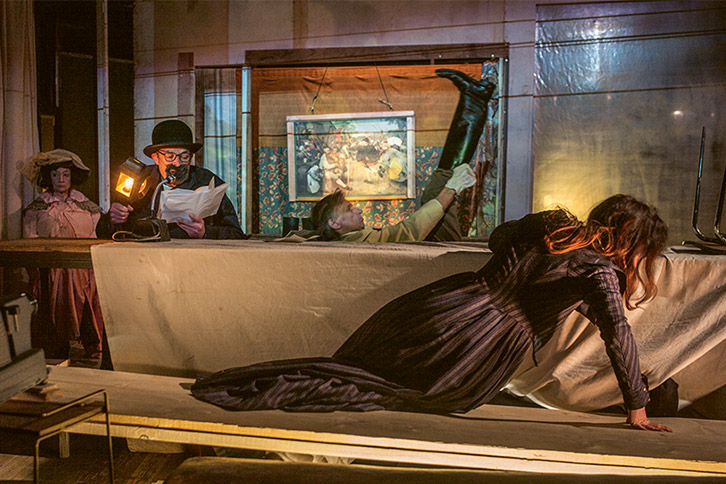 In this ritual of wood, flesh, words and music, François Tanguy evokes the desire for a distant elsewhere and invites us to an interior wandering, guided by the wind itself.

Based with his Théâtre du Radeau in the neighbouring Le Mans, Tanguy often comes to TNB with his precariously balanced wooden sets, fragments of poems, black hats, delicate fabrics, and celestial music. With these, he creates expansive shows for the conscious and unconscious that go beyond the limits of the theatre. Behind this latest creation blows the autan, nicknamed the wind of fools, which flows from the high seas and over the high mountains. In a shifting set, organic forms create enigmatic ballets. Bodies appear and disappear. Everything is busy with its own task. Sitting and watching, the audience can only abandon themselves to the poetry of the stage and listen closely to the whispering of the imaginary.

Across a long catalogue of works produced since founding « La Tente » in Le Mans ( 19 since 1982 ), François Tanguy has become a major figure on the contemporary scene for a whole generation. Familiar face at TNB ( Soubresaut, 2016 ), he digs down through layer after layer of his own visual, musical, sensory theatre.