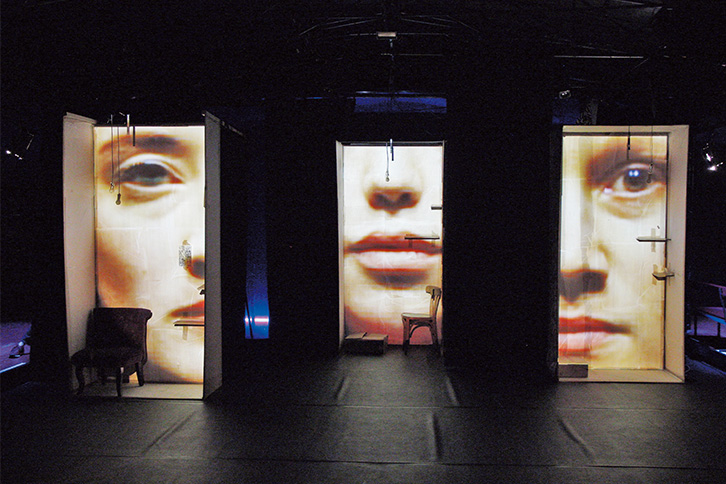 Last season Vanessa Larré installed two phone booths in the TNB lobby where theater-goers could listen in on conversations between prostitutes and their clients.

This documentary material, combined with research into the condition of the female performer based on autobiographical narrative and stage writing, forms the basis of the show she is presenting this year. La Passe explores the feminine  condition through the prism of 3 archetypes: the Mother, the Virgin, and the Prostitute. They are etched in the masculine psyche and male desire in such a way that they never meet. Freud wrote: “Where men love they have no desire and
where they desire they cannot love”. This claim is deeply entrenched in our culture as well and transmitted through the body and silence of women from generation to generation.

To incarnate and represent the 3 archetypes, Vanessa Larré brings to the stage 3 public women: Camille Dagen and Laurence Mayor are performers, Catherine T. is a prostitute. La Passe is the reinvented tale of this Trinity, merging personal stories and fiction. Vanessa Larré explores scenic devices that transgress the traditional relation between the stage and the audience. La Passe invites the audience to immerse itself in the play from behind the scene.

ABOUT
—
Vanessa Larré is an actress, author and stage director. She writes and works for both the theater and the cinema.