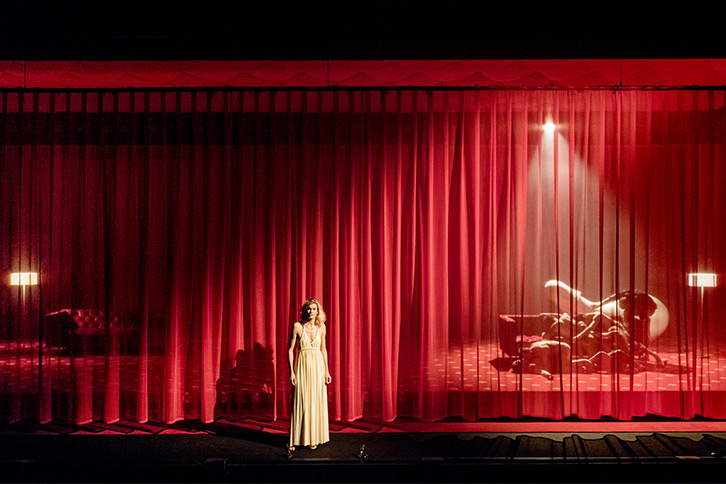 This is the story of a tragic love affair between a young bourgeois gentleman, Armand Duval and a courtesan, Marguerite Gautier, whose beauty holds him in thrall. It is a story haunted by what was and what could have been.

Arthur Nauzyciel stages Camille (La Dame aux camélias) without a hint of pathos, indeed with severity, in an undefined space between Truth and Lie, Reality and Illusion. In so doing, he shines a light on the often hidden dimensions of the play such as the role of money in gender oppression and submission; the trivial quality of dialogue lurking behind much flowery, romantic speech; how, for its own entertainment,
an entire social class – the bourgeoisie of the Second Empire in France – invented a diabolical machine for commercializing the female body and simultaneously promoting the moralization of sexual behavior. A story, which Dumas fils distills from his own complex novel, defending unfortunate wanton girls, while delivering harsh criticism of the dissolution of social mores. Applying the full strength of his poetic and sensual directing, Arthur Nauzyciel opens up spaces to give voice to those who are missing or who have disappeared forever.

For his first creation at the TNB since taking over as director, Arthur Nauzyciel brings to the stage several of his trusted actors: Marie-Sophie Ferdane and Mounir Margoum (La Mouette/The Seagull), Pierre Baux (Ordet/The Word). And he invites others whom he directs for the first time: Océane Caïraty, Pascal Cervo, Guillaume Costanza, Joana Preiss and Hedi Zada. He also invites back some long-standing artistic partners: Valérie Mréjen for the adaptation of the novel to the stage, Pierre Alain Giraud for the video, Damien Jalet for the choreography, Riccardo Hernandez for the set design, Scott Zielinski for lighting, Xavier Jacquot for the sound and José Lévy for the costumes.